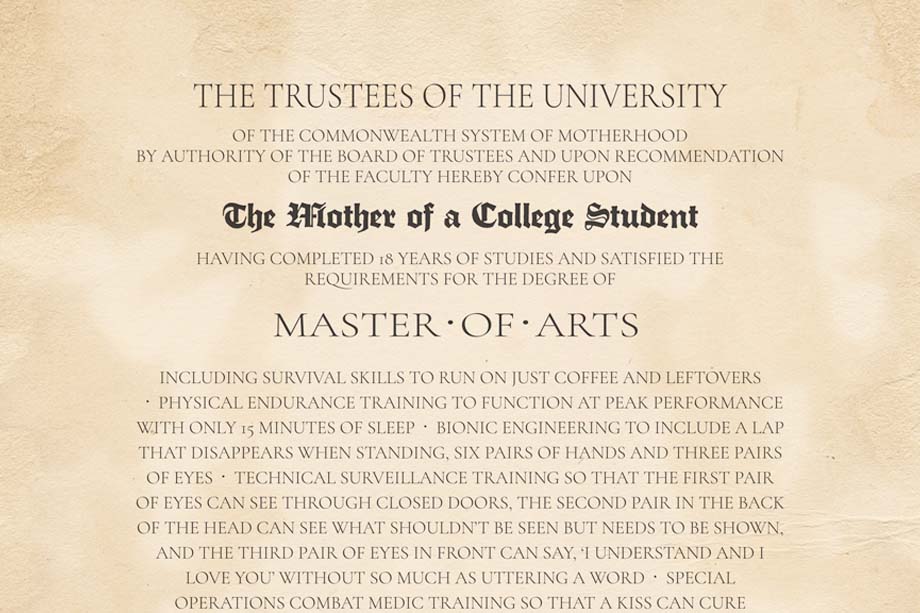 This week I dropped off my favorite child at college.

I’m allowed to call him my favorite child, because he’s my only child and therefore my absolute favorite. It’s a joke between us. To get to college, there are so many pieces that have to come together. I’ve been focused on just getting him there. It seems like we’ve been getting ready for college for the last eight months. And then the day arrives when you load it all up in the car, drive four hours, haul it up three flights of stairs, tour the campus and then say your goodbyes.

There’s a feeling of completion. Of accomplishment. Like, “my work here is done.” And then of course, there’s sobbing in the car on the ride home and the intense desire to text him a hundred times a day to see what he’s doing and where he’s been and whether or not he’s eating. And your favorite child will only respond to one in five messages, because now he’s free for the first time and enjoying his independence, as he should.

Good thing I have friends who have been through this a time or two. My dear friend Jacquie says, after all that, YOU deserve the diploma. After all we do, all the planning and prepping and stressing and hauling and sweaty, grumpy people complaining, Moms are the ones who deserve a diploma. So I made us one.

Mom’s are the ones who deserve a diploma.

It was inspired by this wonderful column from Erma Bombeck, “When God Created Mothers.”

It starts with, “When the Good Lord was creating mothers, He was into His sixth day of overtime when the angel appeared and said. “You’re doing a lot of fiddling around on this one.“

And God said, “Have you read the specs on this order?”

She has to be completely washable, but not plastic. Have 180 moveable parts… all replaceable. Run on black coffee and leftovers. Have a lap that disappears when she stands up. A kiss that can cure anything from a broken leg to a disappointed love affair.
And six pairs of hands.

The angel shook her head slowly and said. “Six pairs of hands…. no way.”

It’s not the hands that are causing me problems,” God remarked, “it’s the three pairs of eyes that mothers have to have.”

That’s on the standard model?” asked the angel. God nodded.

One pair that sees through closed doors when she asks, ‘What are you kids doing in there?’ when she already knows. Another here in the back of her head that sees what she shouldn’t but what she has to know, and of course the ones here in front that can look at a child when he goofs up and say. ‘I understand and I love you’ without so much as uttering a word.”

God,” said the angel touching his sleeve gently, “Get some rest tomorrow…”

I can’t,” said God, “I’m so close to creating something so close to myself. Already I have one who heals herself when she is sick… can feed a family of six on one pound of hamburger… and can get a nine year old to stand under a shower.”

The angel circled the model of a mother very slowly. “It’s too soft,” she sighed.

But tough!” said God excitedly. “You can imagine what this mother can do or endure.”

Not only can it think, but it can reason and compromise,” said the Creator.

Finally, the angel bent over and ran her finger across the cheek.

There’s a leak,” she pronounced. “I told You that You were trying to put too much into this model.”

Somberly, God said, “I didn’t put it there.”

As a gift to all moms of new college students, who may have sprung a leak, you can download a black and white printable version right here. Or you can order it as a framed vintage inspired print, and send it to a deserving mom who has just completed her Master’s Thesis, also known as the college-student drop-off.